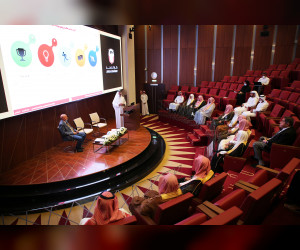 ABU DHABI, 26th May, 2022 (WAM) — The Abu Dhabi Judicial Department (ADJD) received a high-level judicial delegation from the Board of Grievances of the Kingdom of Saudi Arabia, looking to strengthen cooperation and exchange of experiences between the judicial and legal institutions of the Gulf Cooperation Council (GCC) countries, establish the foundations of justice and the rule of law and enhance security, social and economic stability in the countries of the region.

Counsellor Ali Al Shaer Al Dhaheri, Director of the Judicial Inspection at the ADJD, who welcomed the delegation led by Sheikh Ali bin Muhammad Al Sultan, Vice Chairman of the Board of Grievances in charge of Judicial Affairs, stressed the strong relations between the two parties and the importance of mutual cooperation and integration in consolidating the role of the judicial institutions of both countries.


Al Dhaheri also underlined the interest of the ADJD, under the guidance of H.H. Sheikh Mansour bin Zayed Al Nahyan, Deputy Prime Minister, Minister of Presidential Affairs, and Chairman of Abu Dhabi Judicial Department, in exchanging its expertise and experiences with various judicial authorities at the regional and international levels, to implement the approved best practices in the judicial field.

During its four-day visit, the Saudi delegation was introduced to the remote litigation system operated in Abu Dhabi courts, the mechanisms used in court proceedings and the modern technologies deployed by the department to provide world-class judicial and legal services. The delegation was also briefed on the Judicial Department’s 2021-2023 strategy to adopt international best practices and achieve excellence in administering justice through four priorities aimed at supporting judicial specialisation, ensuring the quality of judicial decisions and prosecutorial work, while ensuring business sustainability and continuity in a forward-looking framework, and satisfying customers through the provision of smart and innovative judicial and legal services.

This visit was also an opportunity for the delegation to discover the main building of the Judicial Department where they received a guided tour. They were briefed on the services provided and the ease with which transactions are carried out. They received a detailed explanation of the management of the judicial system and legal services, the tools for monitoring the performance of members of the judiciary and the role of the Abu Dhabi Judicial Academy (ADJA) in qualifying the administrative and judicial control officers in government agencies, the qualification of government advisors, the methodology of selecting and qualifying trainers and preparing training packages, in addition to the ADJA’s experience in judicial training through the Judicial Training Quality Cycles methodology, and the digital and modern technological means used in the field of training.

The guests of the Judicial Department also viewed several awareness-raising films that embody the department’s message in its interaction with society.

The visiting delegation praised the high level of services provided by the department and the wide use of advanced technologies that facilitate access to justice.