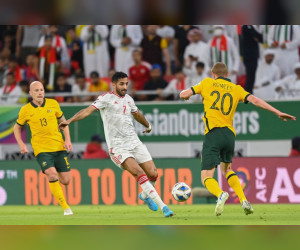 DOHA, 7th June, 2022 (WAM) — Australia are now a step closer to qualifying for the 2022 World Cup after securing a tough 2-1 victory over the United Arab Emirates in Doha tonight.

After a hectic first-half that saw both teams struggle to create serious chances, Australian midfielder Jackson Irvine opened the scoresheet in the 55th minute after a neat series of passes with winger Martin Boyle.

But the Whites struck back less than four minutes later through striker Caio Canedo in the 57th.

Just as the game looked to be edging towards extra-time, it was the 25-year-old Hrustic who came to the Australians’ rescue and fired them to the final step for the FIFA World Cup 2022 against Peru next Tuesday in Doha.