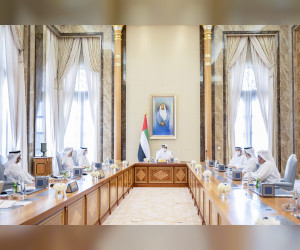 ABU DHABI, 22nd June, 2022 (WAM) — H.H. Sheikh Mansour bin Zayed Al Nahyan, Deputy Prime Minister, Minister of Presidential Affairs and Chairman of the Board of the Central Bank of the UAE, chaired a meeting of the bank’s board held today in Qasr Al Watan.

The meeting was attended by Jassim Mohammed Al Zaabi, Vice Chairman of the Board, Khalid Mohammed Balama, Governor of the Central Bank of the UAE, board members Younis Haji Al Khoury and Sami Dhaen Al Qamzi, and others.

During the meeting, Sheikh Mansour was briefed about the progress of the board’s upcoming plans, in line with the future economic aspirations of the country.

The board was also briefed about the Emiratisation plan for the banking and insurance sectors, in cooperation with the Emirates Institute for Banking and Financial Studies (EIBFS), and learnt about the 2021 report of the Higher Sharia Authority, which included a summary of its key decisions, existing and future projects, and its efforts to supervise and control committees, in addition to the commitment to following the Islamic Sharia Laws and its impact on the growth of Islamic finance.

The report of the “Grievances & Appeals Committee,” which was established by Federal Decree Law No. 14 for 2018 on the Central Bank of the UAE, regulating financial facilities and activities, and its amendments were also reviewed.

The board then discussed matters related to banks and insurance oversight and made the necessary decisions.

The meeting’s agenda included a discussion on administrative and operational matters.

Sheikh Mansour lauded the board’s efforts and its plans aimed at ensuring the country’s fiscal stability.