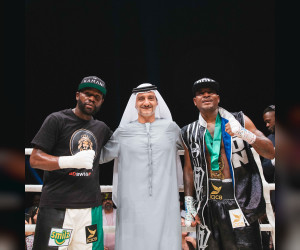 
ABU DHABI, 22nd May, 2022 (WAM) — The Abu Dhabi Boxing Unity Event on Saturday night proved to be a big hit with fight fans, as some of the biggest names of the boxing and MMA worlds, including Floyd Mayweather and Anderson Silva, clashed in front of a sold-out crowd at the Etihad Arena on Abu Dhabi’s Yas Island.

Boxing superstar Floyd Mayweather delivered a blockbuster performance while taking on ‘Dangerous’ Don Moore in eight rounds – entertaining fans till the very last second of the high-octane match. A jubilant crowd cheered on MMA legend Anderson Silva, Badou Jack and Delfine Persoon as they claimed their victories at one of the biggest spectacles of Abu Dhabi’s sporting calendar this year.

Held as part of Abu Dhabi’s ‘Summer Like You Mean It’ campaign, the action-packed fight night was organised at the electrifying venue on Yas Island, further cementing Abu Dhabi’s status as a leading sports tourism destination.