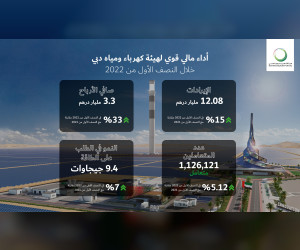 DEWA’s peak demand in the first half of 2022 was 9.4 GW, representing a 7 percent increase over last year.

By the end of the second quarter, DEWA served 1,126,121 customers, representing a 5.12 percent increase from the same time last year.

Saeed Mohammed Al Tayer, MD & CEO of DEWA, said, “DEWA’s half year financial results demonstrate our commitment to advancing strategic priorities of sustainability focused smart growth, enhanced customer happiness, operational excellence and attractive capital returns for our shareholders. Continued focus on project delivery, innovation and accelerating our digital transformation has bolstered our results through the first six months of 2022. We maintain a significant capacity to deploy capital through a disciplined investment strategy with a focus on meeting the aspirations of the Emirate of Dubai.

“In line with our strategy, we continue to provide a robust infrastructure to keep pace with rapid developments in Dubai and provide our services to more than a million customers according to the highest standards of availability, reliability, efficiency, and safety. We continue to implement pioneering projects to diversify Dubai’s clean and renewable energy sources and achieve our wise leadership’s vision for a bright and sustainable future for future generations.”

In the first half of 2022, DEWA’s installed capacity increased by 700 megawatts (MW) to 14,117 MW. This includes 600 MW from the Hassyan Power Complex, which runs on natural gas and 100 MW from the 5th phase of the Mohammed bin Rashid Al Maktoum Solar Park (MBR Solar Park), which runs on photovoltaic (PV) solar panels. MBR Solar Park is the largest single-site solar park in the world, built on the Independent Power Producer (IPP) model, with a planned capacity of 5,000 MW by 2030.

DEWA continues to improve its overall efficiency by adopting the latest smart technologies and innovative practices across all its services and operations.

In June 2022, DEWA launched an Automatic Smart Grid Restoration System (ASGR), the first of its kind in the MENA region, to increase the control, management, and monitoring of its power network. The system works round the clock without any human intervention. It uses a smart, innovative, and central system that locates the fault in the power network, isolates it and automatically restores the service. This improves grid automation, fault detection and retrieval of connections.

In the second quarter of 2022, and as part of the Smart Living initiative, DEWA added a Self-Assessment tool for residential customers to easily understand their consumption patterns. This is part of DEWA’s effort to make Dubai homes more sustainable and efficient. Since its inception, the Smart Living Initiative service has saved up to 8 billion gallons of water.

DEWA is the first utility worldwide to use nano satellites to monitor and improve the operations, maintenance and planning of its electricity and water networks. In May 2022, DEWA signed an MoU with Eutelsat, the French global satellite operator, to provide technical support for DEWA’s Space-D programme and DEWA’s 3U nanosatellite DEWA-SAT1. This will help develop nanosatellite Internet of Things (IoT) terminals and enhance connectivity between DEWA’s assets and its nanosatellite. In addition, DEWA pro-actively harnesses the use of drone technology, using advanced drones for asset inspection purposes to support Dubai’s growing infrastructure.

DEWA has won three Global Excellence Assembly Awards in the first half of 2022. These are the Excellence in Innovation Award, the Business Innovation Award and the Outstanding Customer Service Award. Also, DEWA won the Globe of Honour Award for Environment and the Sword of Honour for Health and Safety from the British Safety Council in the second quarter of 2022.

DEWA is currently reviewing the possibility of an IPO of its majority-owned subsidiary, Emirates Central Cooling Systems (EMPOWER). The timing and size of the same are under study and are subject to all the necessary approvals.

DEWA reiterates its dividend policy and expects to pay a minimum dividend of AED6.2 billion per year over the next five years. The dividends are intended to be paid twice each fiscal year in April and October. The first dividend payment of AED3.1 billion is expected to be made in October 2022.