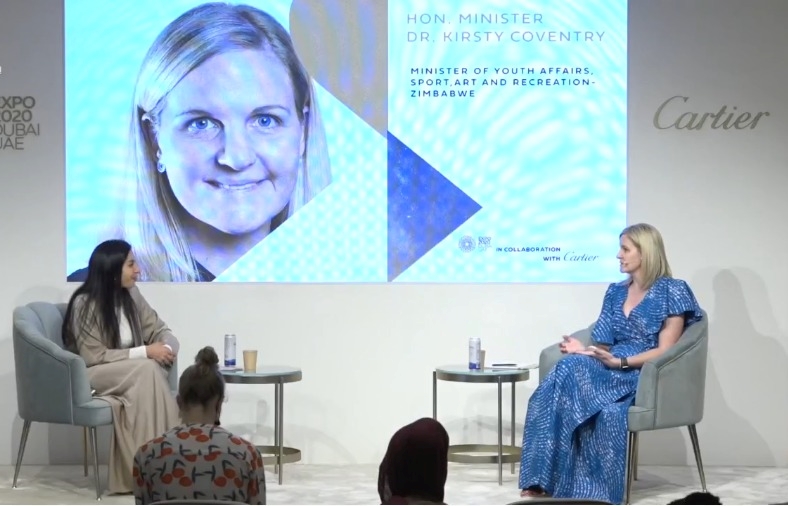 DUBAI, 15th March, 2022 (WAM) — Equal access to opportunities is critical to gender equality and women’s empowerment, but it is equity that will genuinely make an impact, according to Dr. Kirsty Coventry, Cabinet Minister for Youth Affairs, Sport, Art and Recreation of Zimbabwe.

On Monday, the Zimbabwean Minister spoke at a “Visions and Journeys” event at the Expo 2020 Dubai Women’s Pavilion, sharing Zimbabwe’s path to transformative results for women and insights to avoid harmful biases in the economies of the future.

The Minister said, “One of the challenges we will face is creating equity for all, because it’s not just about equality. We have to make that switch because it’s not just about filling quotas – which are great and still necessary in many cultures – but we also have to start expecting equity to ensure that we’re not having the same conversations in the next 10 to 15 years.”

She also pinpointed the abuse of power as a significant obstacle to achieving women’s empowerment, sharing that many people in leadership positions constantly make young women and girls feel they are not capable.

Education, both formal and informal, is also integral to achieving gender equality and women’s empowerment. Coventry reinforced that young girls should be taught to understand and expect equity and see their parents challenging gender stereotypes – such as a father picking up the children from school and cooking dinner.

Prior to her ministerial role, Dr. Coventry was an Olympic athlete and is the most decorated Olympian in Africa, having won seven Olympic medals for swimming. She has broken multiple world records and now acts as a member of the International Olympic Committee, is a member of the World Anti-Doping Agency, and Chairperson of the Senegal 2022 Youth Olympic Games Coordination Commission.