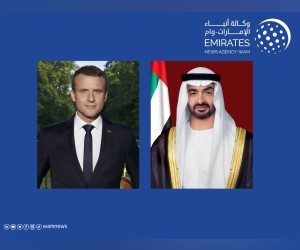 PARIS, 18th July, 2022 (WAM) — UAE President His Highness Sheikh Mohamed bin Zayed Al Nahyan today attended a banquet hosted by the President of France, Emmanuel Macron in honour of His Highness and his accompanying delegation, currently in a visit to France.

During the dinner, held at Palace of Versailles, His Highness Sheikh Mohamed bin Zayed extended thanks and appreciation for hospitality and warm welcome. He said, “My dear Friend, President Emmanuel Macron, I would like to extend thanks and appreciation for the warm welcome I received during my visit and the accompanying delegation to your country.”

He added that the Emirati-French ties are distinguished as they are based on confidence, credibility and mutual respect. They were established with all the love and sincerity by the late Sheikh Zayed bin Sultan Al Nahyan with the French leaders.

His Highness said that your friendly country and people have special position among the UAE and its people. ”It is true that we have political and economic ties, but our cultural cooperation represents our utmost collaboration and this mirrors the quality of this strategic partnership.”

The UAE President expressed his confidence that through joint action, the two countries can provide more opportunities for enhancing in their relations, and jointly contribute to establishing peace and security in the region and the world.

In the end, His Highness renewed his greetings to President Emmanuel Macron for his constant interest in continuing consultation, joint coordination and developing various aspects of cooperation between the two countries, wishing him success and further prosperity for the friendly French people.

In turn, President Macron welcomed His Highness to France and expressed his happiness at meeting him.

He said, “I am pleased that you have chosen France to be your first state visit after being elected as a President of the UAE. I appreciate your interest and realise how important it is.”

The President of France described the visit as “historic”, referring to the last visit paid by the late Sheikh Zayed bin Sultan Al Nahyan during the era of François Mitterrand, Former President of France. ”This was 30 years ago and since then we have come a long way, as the relations became a partnership and then moved to an alliance that was strengthened by friendship between the two countries, he indicated.

He also pointed at the personal friendship that binds him with His Highness the UAE President.

President of France said, “Through your new presidential duties, you will continue your efforts to make the UAE a strong, stable, diversified and growing economy and an influential member of the international arena in addressing global and regional challenges. France has been and will remain a faithful friend to you to achieve this aspiration. Our relations are based on two main pillars: loyalty and reliability.”

He also emphasised that hope and belief in the future that the two countries build together is an integral part of the bilateral relations.

He said, “I welcome you to a land that you are familiar with. We share places that are symbolic for youth and culture with Abu Dhabi, including the Louvre Museum and the Sorbonne University. The UAE has also become a familiar and natural destination for the French people as more than 25,000 of its citizens chose the UAE as the destination for French ambition.”

Macron noted that ambition is at the core of the two countries’ ties, as it is based on confidence and excellence, pointing to the tremendous success of the economic partnership in energy, infrastructure, transport and new technologies, thanks to joint and mutual investments.

”The joint ambition of the two sides today is to strengthen and diversify these successes.”

The French President also welcomed the signing of the comprehensive strategic partnership agreement on the transformation in energy and renewable energies fields, which will avail responding to the challenge facing the world, which is the climate challenge.

He also wished success for the UAE in hosting of COP28 summit in Dubai in 2023 after seven years of the Paris Agreement.

”Your ambition has met expectations and France will stand by you in your preparations to meet this deadline,” he indicated. The President of France welcomed expanding of space cooperation between the two sides, which extends to the moon and manned space flights. Cooperation mirrors the level of our relations, as it is has no borders, he concluded.