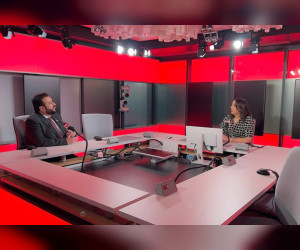 PARIS, 11th August, 2022 (WAM) — Mohammed Jalal Al Rayssi, Director-General of the Emirates News Agency (WAM), has affirmed that the Global Media Congress, which will be held in Abu Dhabi from 15th to 17th November, 2022, constitutes a comprehensive, rich and innovative international platform that foresees the future of the media sector in the region and the world.

Al Rayssi underscored that the convening of the global event in conjunction with the International Day for Tolerance, which falls on 16th November of each year, reaffirms the importance of moving forward in developing the media sector as a mainstay for sustainable development, as well as spreading and consolidating the values ​​of coexistence, tolerance and peace in the world.

In an interview with Radio Monte Carlo Doualiya from the French capital, Paris, Al Rayssi highlighted the distinctiveness of the Emirati-French relations, noting to the opportunities for joint cooperation in the media sector, as WAM looks forward to strengthening its relations with French media and building sustainable partnerships.

He explained that the Global Media Congress will allocate a portion of its discussions to review the importance of making the media an instrument for promoting tolerance and coexistence, as the Congress is offering a unique and qualitative content with the participation of a selection of media institutions, specialised companies, experts, specialists and influencers from around the world. The global event is filled with a rich work agenda, as it includes a specialised exhibition for media institutions and companies, both regional and global, during which they will showcase their products and ideas, he added.

Al Rayssi stated that during the event, a platform will be available for the first time to present new innovations in the media sector across various fields, including press, radio, television or new media, adding that everyone working in this field needs to get acquainted with the latest innovations in this sector to contribute to the refinement of their skills and the development of their abilities.

He stressed that the Global Media Congress is also witnessing a 3-day conference, which focuses in its first day on “investment in the media”; in its second day on “innovation in the media”, artificial intelligence and its important role in the sector; and in its third day on “the human in media”. It also provides seminars to review the development of the media sector in different continents of the world such as Latin America, Asia, Europe and Africa, he continued.

Al Rayssi emphasised that the Global Media Congress will have specialised workshops, in addition to a “Social Responsibility Programme” targeting new journalists and media professionals to provide them with training programmes, in addition to hosting joint meetings of international media companies and institutions.

He also pointed out that the Congress, which is the largest event in the media sector in the world, is hosting a “Media Lab”, during which prominent international officials will talk about the challenges facing the sector and the proposed solutions and initiatives.

WAM Director-General asserted that the world is witnessing rapid changes, and the media sector must have a forward-looking vision in this regard to address future trends in various sectors from which the public can benefit, adding that the role of media should not be limited only to transmitting and presenting information.

“In the UAE, we believe in complementarity, and the media sector is among the country’s important and vital sectors. The Global Media Congress also focuses on the principle of complementarity, achieving mutual benefit and consolidating creativity in the global media sector,” Al Rayssi affirmed.

He underlined that the Emirati media sector is part of the UAE’s vision to achieve leadership in all sectors, noting to the keenness for this sector to keep pace with the country’s strategic plans and its vision for the future, and to play its important role as a pillar of sustainable growth and development.

During his interview with Radio Monte Carlo Doualiya, Al Rayssi touched on the plans of the Emirates News Agency to open regional offices in various parts of the world, noting that the UAE, with its rich cultural diversity and with the presence of more than 200 nationalities, and in light of the development and achievement it is witnessing acorss all fields, WAM can provide distinguished media content to all nationalities residing in the country and in various languages, as well as enhance the country’s distinguished global reputation and highlight its achievements, development paths and human values ​​to the world at large.

Al Rayssi extended an invitation to all media institutions in the region and the world, and those working in this sector, to be present in the Global Media Congress and to work together to develop this vital and important sector, as well as to get closely acquainted with the UAE and its path decorated with achievements attained over the past 50 years, in addition to to its rich cultural diversity and ideal climate for tolerance and coexistence among all nationalities.