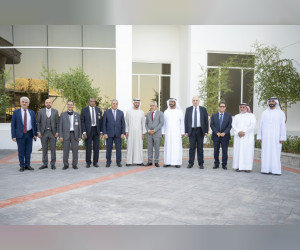 During the meeting, which took place at Qasr Al Bahr Palace, His Highness exchanged cordial talk with the Award’s representatives and wished them continued success to come up with innovative initiatives to strengthen palm cultivation and production of dates in the region and the world.

Highlighting the significance of the date palm, being a bountiful symbol of Emirati heritage, His Highness underlined the paramount interest the UAE attaches to this sector to enhance its contribution to food security and national economy.

During the meeting, Dr. Abdel Wahab Zayed presented an overview of the achievements made by the Khalifa International Award for Date Palm and Agricultural Innovation over 15 years, and the outcome of the conference over 24 years. He referred to a significant study on the production of dates from a date palm whose origin can be traced back to 2000 years.

Dr. Abdel Wahab also dedicated to Sheikh Mohamed the Award’s Annual Report and the latest two books published by the Award at the international level.

The delegation appreciated the UAE’s hosting of the 7th International Conference on Date Palm, considered one of the key events addressing the development of the palm cultivation sector and production of dates worldwide and valued the considerable support provided by the UAE leadership in this field.

The conference is held under the patronage of President His Highness Sheikh Khalifa bin Zayed Al Nahyan on March 14-16 in Abu Dhabi in the presence of ministers of agriculture, senior officials, and 475 researchers and academics from 42 countries.