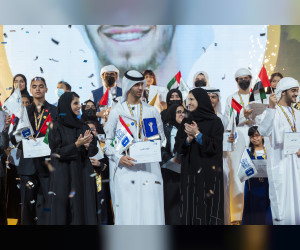 Mohammed Ali Al Yamahi won the sixth edition of the competition, after outstanding 354,846 students from 689 schools across the country. The students were overseen by 1,378 teachers.


A special event was held at the Higher Colleges of Technology in Dubai, where the announcement was made. Sarah bint Yousif Al Amiri, Minister of State for Public Education and Advanced Technology and Chairwoman of the Emirates Schools Establishment; and Sarah Al Nuaimi, Director of MBRGI, attended the event.

This year’s Arab Reading Challenge was the largest in the competition’s history, with some 22 million students from 44 countries participating. This year’s event was the first in two years to be held in-person.

“The UAE’s leadership has made education a priority over the past 50 years and considers it a crucial pillar in the country’s next five decades. There is a need for education to keep pace with technological, environmental, and societal changes of the future. Education also has an important role in strengthening the UAE’s link with its heritage and reinforcing its cultural values to help consolidate its development and position on the global stage,” Minister Al Amiri said.

“Students are at the heart of the UAE’s education system. We are committed to fostering a supportive educational environment that enhances their abilities, nurtures their curiosity and learning, and sharpens their skills. The Arab Reading Challenge is an innovative educational initiative which leverages technology and smart teaching tools to help students develop,” she added.

This year’s competition featured 10 finalists, overseen by a judging panel. As well as recognising the winner, judges gave honourable mentions to the other nine finalists. The competition also awarded the top school.

For her part, Sarah Al Nuaimi commented, “The Arab Reading Challenge supports Emirati generations that seek to achieve the objectives of the UAE Centennial 2071 Plan. Encouraging reading is the best investment we can make in future generations as it enables them to gain the necessary skills and knowledge to meet rapid changes in a world that is full of challenges. The current and future generations will continue the UAE’s journey to becoming the best country in the world by its centennial in 2071.”

“This year’s edition of the Arab Reading Challenge has been exceptional in all areas and was the largest and most influential yet. We understand that investing in reading is an investment in the future since it opens minds, broadens horizons, boosts curiosity, and enhances values and excellence. Within the vision of His Highness Sheikh Mohammed bin Rashid Al Maktoum, Vice President, Prime Minister and Ruler of Dubai, reading is key for enhancing the role of this region in the future of humanity,” she noted.

In 2015, His Highness Sheikh Mohammed bin Rashid Al Maktoum, Vice President, Prime Minister and Ruler of Dubai, launched the Arab Reading Challenge to be the largest Arab project to encourage students in the Arab world to read, with the aim of encouraging over 1 million students to read 50 million books during their school year.

The challenge is divided into five stages. Each stage includes reading and summarising 10 books for children, after which the qualifying stages begin at a school level. The competition then progresses to the country level and then the finals. The challenge offers incentives and financial rewards for schools, students and their families.