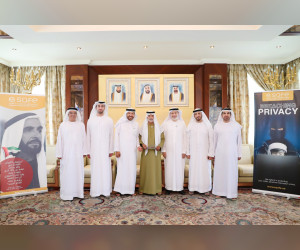 This came when Sheikh Nahyan bin Mubarak received at his palace today the Society’s Board of Directors and received the honorary shield of the Society from Dr. Abdullah Al-Mehyas, Society’s Chairman, who presented to him a report on the society’s activities, efforts, achievements, programs and initiatives.


Sheikh Nahyan praised the efforts of the Emirates Safe Internet Society in enabling the community to use the internet in a safe and responsible way, and its role in protecting children from the dangers and negatives of bad use of the Internet and social media through education and raising awareness in children, capacity building and activating the preventive, supervisory and advisory role to protect against risks on the Internet and through benefiting from the positive and age-appropriate content in the cyberspace.

He called on the Society’s Board of Directors to work on building preventive strategies and policies to raise awareness on the challenges and dangers facing our children, preparing research and studies on protecting children on the Internet, and enhancing their moral education by providing integrated, distinguished, pioneering child protection programs.

He praised the Society’s cooperation and partnership with various institutions which contribute to achieving its goals since its establishment in 2015 including the Ministry of Interior, the Khalifa Empowerment Program (Aqdar), the General Women’s Union and other leading national institutions.

For his part, Eng. Adel Alkaff Alhashmi, Vice Chairman of the Society :”On behalf of the members of the Board of Directors and Society’s members, expressed his thanks and appreciation to Sheikh Nahyan bin Mubarak Al Nahyan for accepting the honorary presidency which will have a great positive impact in supporting the initiatives and projects of the Society and an outgrowth for rehabilitating and developing the national capabilities of youth to acquire the professional skills in the digital world.

He also referred to the Society’s ambitious vision to become a sustainable and internationally recognized center in the protection of children on the Internet, which in line with the directives of the wise UAE leadership which aims to enhance the children’s awareness and the positive safe use of the Internet to shape a safe future for digital safety.

Alhashmi stressed that the Society’s work map includes the rehabilitation and integration of children and adolescents victims of cybercrime among the Society’s priorities, and its vision is to enhance the capabilities and skills of psychologists to enable them to implement treatment and rehabilitation programs related to technology addiction and others.