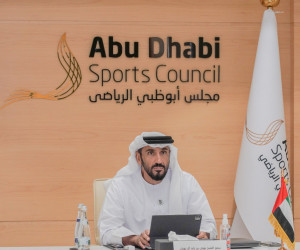 Sheikh Nahyan revealed it while presiding over the periodic meeting of the Abu Dhabi Sports Council at its headquarters on Wednesday.

A number of important matters that serves the progress of the sports sector in Abu Dhabi were discussed and the development programmes and plans for community sports as well as international sporting events held annually were reviewed at the meeting.

The aim of enhancing community sports and Abu Dhabi’s position as a leading destination as a global sports industry were subjects that were discussed and debated.

The general performances of sports clubs in the Emirate of Abu Dhabi in terms of administrative, financial and management aspects, were also on the agenda with Sheikh Nahyan recommending of an internal audit committee in these clubs to achieve more successes.

Sheikh Nahyan approved the draft budget of the Abu Dhabi Sports Council for the year 2023 with all its various programmes, initiatives, activities and events aimed at achieving the objectives of the Abu Dhabi government’s healthy lifestyle initiative.

The meeting reflected in promoting community sports and active lifestyle, and in addition to continuing with plans to attract major international sporting events that contribute in economic resources of the Emirate.