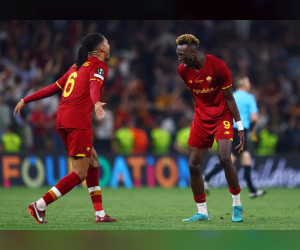 
TIRANA, 25th May, 2022 (WAM) — Roma beat Feyenoord 1-0 on Wednesday to claim the inaugural Europa Conference League title and a fifth overall on the continent for their coach Jose Mourinho.

Nicolo Zaniolo scored the winner in the 32nd minute in Tirana for Roma’s first official title in Europe, but not after being saved by the post and crossbar in the second half.

Roma won the 1961 Fairs Cup but that tournament was not recognised by UEFA at the time, and then lost the 1984 Champions Cup and 1991 UEFA Cup finals. Meanwhile, their Rotterdam opponents lost a first final in Europe, having previously won the 1971 Champions Cup plus 1974 and 2002 UEFA Cup.