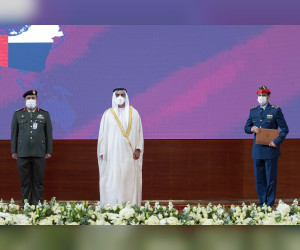 Sheikh Saif was shown a short video that reviewed the course from its inception to the graduation stage. This was followed by the announcement of the course’s general result, and the distribution of certificates to the top achievers and graduates of other friendly countries, after which His Highness took a group photo with the graduates.

The honouring ceremony was attended by Lt. General Hamad Mohammed Thani Al Rumaithi, Chief of Staff of the UAE Armed Forces; Mattar Salem Ali Al Dhaheri, Under-Secretary of the Ministry of Defence; along a number of senior officers from the Ministry and Armed Forces.