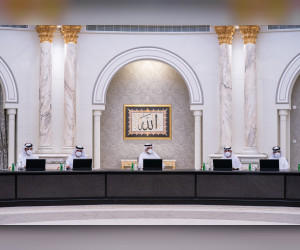 During SEC’s meeting, various governmental issues were discussed to develop the government’s workflow and advance all sectors in the Emirate of Sharjah.

The Council approved the draft of the electronic system for truck toll gates, which aims to develop the procedures and services currently used and turn them into smart ones that contribute to eliminating traffic congestion and speeding up the mechanism used at truck gates.

The system will also contribute to reducing the parking time of trucks, preventing congestion outside the precincts of their gates, facilitating follow-up and monitoring of movement, and reducing the occurrence of collection errors and human errors.

The pre-existing truck gates contribute to organising their traffic and collecting the fees allocated to them to develop and maintain the damaged road network on a regular basis, as Sharjah roads represent a main crossing for all commuters between the emirates of the country due to its strategic and vital location, Sharjah works to provide the best traffic services without imposing any fees on other vehicles.

The council discussed the report on evaluating the efficiency of the main urban elements of the commercial centre in Sharjah.

The report included the urban growth of the city during the past decades and indicators of residential, commercial and industrial expansion.

The report included a number of efficiency assessment topics, such as monitoring urban observations, evaluating the road network, monitoring unused shops and housing units, and identifying deficiencies in community services.

The report included a number of proposals and recommendations, as the Council directed their study in coordination with the concerned authorities and the development of integrated plans to implement them in order to enhance the efficiency of the infrastructure and the competitiveness of the commercial and industrial sector.

The Council reviewed the report on the achievements of the Sharjah Entrepreneurship Foundation “Ruwad” for the year 2021.

According to the report, the total value of project financing until the year 2021 was more than AED 31 million, including direct or indirect financing from the Foundation in cooperation with Sharjah Islamic Bank.

The report included statistics on the growth of pioneering projects in all cities and regions of the emirate and the number of members in the organisation, which amounted to 957 projects.

“Ruwad” has trained more than 6,000 beneficiaries, and contributes to providing consultations and following up on members, which contributes to developing their projects and ensuring their sustainability, in addition to conducting many studies on entrepreneurship and projects in the Emirate of Sharjah.