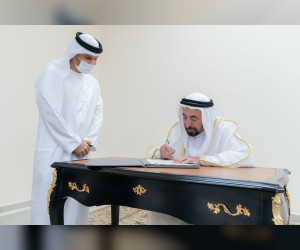 SHARJAH, 9th August, 2022 (WAM) — H.H. Dr. Sheikh Sultan bin Muhammad Al Qasimi, Supreme Council Member and Ruler of Sharjah, as the President of the University of Khorfakkan, issued several resolutions regarding the appointment of a Director of the University and a Deputy Director for Community Affairs and Public Relations, in addition to appointing the first female university graduate from the University of Sharjah.

Resolution No. 2 stipulated that Prof. Dr. Ahmed Ibrahim Al Shammaa be appointed Director of the University of Khorfakkan.

Resolution No. 3 stipulated that Dr. Abdullah Suleiman Obaid Al Mughni will be appointed as Deputy Director of the University of Khorfakkan for Community Affairs and Public Relations.

Resolution No. 4 stipulated that Dr. Ruqayya Abbas Ismail Al Amiri shall be appointed as an Assistant Professor (Marine Biology Programme).

Dr. Al Amiri is the first professor to be appointed at the University of Khorfakkan within the faculty. She is a graduate of the University of Sharjah, and has completed her postgraduate studies in water and environmental engineering in the conservation of marine life.

The Ruler of Sharjah stressed the importance of studying environment-related sciences due to the experiences and sciences available that help in understanding it. He pointed out that anyone preparing for the labour market needs to be equipped with science.

Dr. Sheikh Sultan spoke about the goals and importance of marine sciences, which will have a specialised college at the University of Khorfakkan, saying, “When God created this earth, God made it of land continents by 29 percent and oceans by 71 percent, which is the largest percentage. If we look at what is on this dry land, we will find many good things in it that have been consumed on its surface and interior. We did not think about the oceans and the bounties they contain, although it is easy for us to enter. It calls for study, research and science, and this is what we are working to provide for students.”

The Ruler of Sharjah concluded his speech by advising his sons and daughters to join and study at the College of Marine Biology, pointing to his deep knowledge of the extent of the spread of this college.