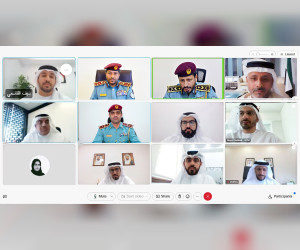 The meeting was attended by heads and directors of federal and local authorities and departments in the emirate, to present the outcomes of the efforts made during the recent weather condition in the Eastern Region, and discussing the expected climatic changes in the coming period.

Al Shamsi welcomed the attendees, expressing appreciation for the efforts of the response teams from all the local and federal participating parties that worked to contain the recent weather situation and reach the stage of full recovery, which reflects the effectiveness of the proactive measures taken at all levels. In addition to the readiness of the work teams and their role in enhancing security and protection and preserving lives and property.

The meeting reviewed a report by the National Centre of Meteorology, in which it outlined the measures it had taken to warn about the recent weather situation and its impact on the UAE to take precautionary and preventive measures in the affected areas by all concerned authorities, to reduce and mitigate the repercussions of the weather situation.

This is followed by a review of the results of the efforts made by local and federal authorities and departments during the recent weather conditions. In addition to the statistics and indicators included in that period, which reflected the complementarity of roles between response teams to deal with the emergency, coordinate, and standardise dealing procedures according to the national system.

The meeting also reviewed strengths, opportunities for improvement, and corrective measures and their application to ensure the highest standards of response speed and optimal handling of emergencies.

The meeting came out with several recommendations aimed, in general, to improve the mechanisms of joint work between local and federal authorities, and to develop plans in line with the vision of the Emirate of Sharjah, most notably the Prevention and Safety Authority holding educational workshops directed to members of the public.