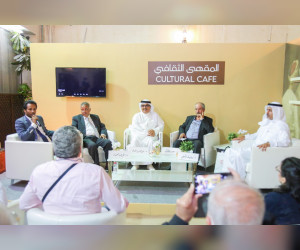 Amid a remarkable turnout from the public and lovers of ancient heritage, the event blends authentic, and traditional culture with today’s modern culture, including scientific developments and technological acceleration, to confirm that the future is only made by thought. The orthodoxy based on deep-rooted values and concepts of aspiration for the best, comes through the blending of the past with the present and their interaction.


Held under the slogan ‘Heritage and the Future’, the nineteenth edition of the festival includes many interesting and lively events and programs that focus on the heritage of people and their culture. Organised by the Sharjah Institute for Heritage (SIH) and under the generous patronage of H.H. Dr. Sheikh Sultan bin Muhammad Al Qasimi, Supreme Council Member and Ruler of Sharjah.

Over the course of 18 days, the festival is taking place in the Sharjah’s heritage area in the heart of Sharjah from 10th to 28th March. In addition, accompanying events will be organised successively throughout the month in Kalba, Khorfakkan, Dibba Al Hisn, Al Dhaid and Al Hamriya.

The festival’s location in Sharjah’s heritage area has been decorated with an abundance of folklore and folklore dances and local, Arab, and international songs.

Performances by The Al Liwa Band, Al Habban Band and Al Harbiya Band have been impressing audiences, while the Armenian band’s dances have attracted the state, the guest of honour of the festival and lovers of international folk art in the SHD Theater. Mesmerising dances have also included the Andima dance from the Republic of Lithuania, the dances of Russian bands, and an Iraqi session.

Moving on from music and dancing to literature, the children and adolescents in the ‘Bint Al-Matar’ corner, run by the International School of Storytelling, had various interactive workshops, including the children’s storyteller (the storyteller Amira) and many educational and theatrical programs. Competitions and daily entertainment programs for young and old also took place in different locations inside and outside the arena, while the Heritage Craft Village hosted the “Ghars” training workshop, which dealt with the Talli craft from the sisterly Arab Republic of Egypt and lasted for two days.

Within the Cultural Café, Dr. Abdulaziz Al Musallam, Chairman of Sharjah Institute for Heritage, and Chairman of the Higher Organising Committee of Sharjah Heritage Days, Dr. Omar Abdulaziz, Dr. Saeed Yaqtin and Salama Al-Raqi participated in a symposium entitled ‘Cultural Heritage and the Horizon of the Future’. This fascinating symposium was ably moderated by Dr. Mini Bounama, Chairman of the Cultural Committee for Sharjah Heritage Days.

Starting the symposium was Dr. Abdulaziz Al Musallam. He explained how this year’s slogan of ‘Heritage and the Future’ stemmed from the idea that Sharjah, in its renaissance and comprehensive development, flies with strong wings that represent authenticity and modernity, in a deep adherence to the values of the identity of the past and a confident aspiration that creates and anticipates the future.

Al Musallam stressed that this approach is embodied in the emirate’s interest in preserving heritage and authentic identity, whilst embracing the development of advanced scientific and research institutions and the most prestigious centers of innovation, technology, space and astronomy.

The activities of the Sharjah Heritage Days will be launched in the city of Al Dhaid in the Al Dhaid Fort, from 13th to 19th March, at 17:00, and will include the SIH’s Corner, and the Workshops Corner, which consists of 11 heritage workshops for children and adults. In addition, the Cultural Café and Academic Administration Corner will feature lectures such as an introduction to professional diplomas and management academy.