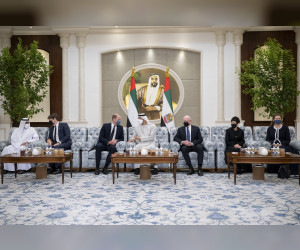 ABU DHABI, 16th May, 2022 (WAM) — President His Highness Sheikh Mohamed bin Zayed Al Nahyan continues to accept condolences, on the third day, from heads of state, government leaders, and delegates from nations around the world on the passing of Sheikh Khalifa bin Zayed Al Nahyan.


World leaders and heads of government offered condolences to the sons of the late Sheikh Khalifa bin Zayed Al Nahyan, Al Nahyan Family, and the Emirati people. They recalled his legacy and wisdom which had obviously reflected in the UAE’s wise, moderate and cooperative policy based on enhancing peace and constant and unstirring efforts to promote security and stability in the region and the world and following the legacy of the Founding Father the late Sheikh Zayed bin Sultan Al Nahyan since the establishment of the country.

The world leaders and their accompanying delegations also congratulated His Highness Sheikh Mohamed bin Zayed Al Nahyan for his elections as UAE President and wished him good luck to continue the journey of the founding fathers for further development and progress.

In turn, His Highness Sheikh Mohamed bin Zayed extended appreciation for the warm feelings of Their Highnesses, Majesties and excellencies towards the UAE and its people.

He thanked them for congratulating him on his election as UAE President and for their sincere wishes.

His Highness Sheikh Mohamed bin Zayed wished them good health and wellness and continued progress, prosperity, security, and stability for their brotherly and friendly peoples and countries.