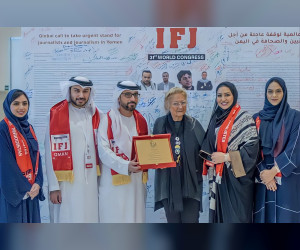 MUSCAT, 3rd June, 2022 (WAM) — The UAE has maintained its seat in the International Federation for Journalists (IFJ), after Mohammed Al Hammadi, Chairman of the UAE Journalists Association (UAEJA), won in the election held today for the IFJ’s executive committee membership.

The elections took place during the 31st Congress of the IFJ held in Oman.

On Tuesday, Al Hammadi also obtained membership in the Executive Bureau of the Federation of Asia-Pacific Journalists (FAPaJ), which was established during the Muscat meetings.

The UAE has a strong and distinguished presence in regional and international press events.

Al Hammadi thanked all unions and associations that voted for the UAE.

Al Hammadi also stressed that this achievement was accomplished due to the participation of the UAE Journalists Association in international events.

The 31st World Congress of the International Federation of Journalists took place from May 31 until June 3 in Muscat, Oman.

Over 250 participants representing journalists’ unions and associations from 92 countries attended the Congress, with key themes including the surveillance of journalists and action to end impunity for crimes against media workers.