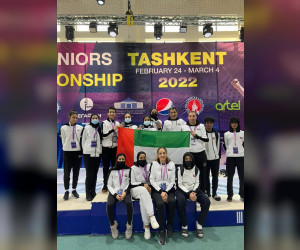 The first-of-its-kind sporting achievement in the UAE’s history, the milestone follows another accomplishment by Mohammed Al-Mazmi, who secured the third place for the Abyei weapon competition, within the same competitions

The championship’s final scores saw the UAE come third after Hong Kong and Kazakhstan respectively then India in the fourth place.

The UAE team will be back home tomorrow morning after a stellar performance against Kazakhstan and then India.