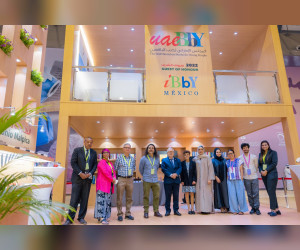 Marwa Al Aqroubi, President of UAEBBY, received Counsellor Federico Chabaud, Deputy Head of Mission at the Mexican Consulate in Dubai, at UAEBBY’s pavilion, where he was briefed on the council’s efforts in advancing children’s literature.

The Mexican delegation also included renowned author Antonio Malpica, recipient of 23 local and international awards; Mariana Morales Guerra – IBBY Mexico representative, and organiser of cultural projects; author Juan Gedovius, who has published more than 90 books and recipient of local and international awards, with the most recent being winner of the ‘Book of the year’ in the children and young people category – CANIEM awards (2021).

The UAEBBY organised a series of interactive activities as part of its participation at the 13th edition of SCRF that included workshops and storytelling sessions, in addition to other events in various places in Sharjah.

Al Aqroubi said, “The partnership is designed to strengthen bilateral relations and support knowledge exchange with International Board on Books for Young People’s councils around the world, to bring children closer to books and knowledge sources, formulate creative initiatives to advance and develop rich content that will help raise awareness of the community.”